I decided to write this tool because I have needed to sign assemblies myself a number of times. When contacting the developer fails, it leaves you little choice. You either leave your projects unsigned which is often not an option, or find a way around the problem.

I first learnt how to do this trick from OJ Reeve’s article on signing and unsigned assembly. The information is somewhat dated and doesn’t mention using the /TYPELIST option which is crucial to make the round-trip in some scenarios. There are some other tools out there that do this but are also out of date, lack features, are difficult to configure and sometimes create unpredictable results.

Developers still struggle to overcome this problem so I wanted to create a really simple UI, command-line and API to simplify the process. I used the existing tools for inspiration and made sure that Strong-Name Signer overcame all the issues that they currently have.

This application is the answer to your assembly signing needs. Whether you prefer to use an GUI, the command-line or an API, Strong-Name Signer covers all those bases.

Drag-and-drop files or directories and .NET assemblies will be detected. Kept it very simple so it’s accessible and understandable by any user. 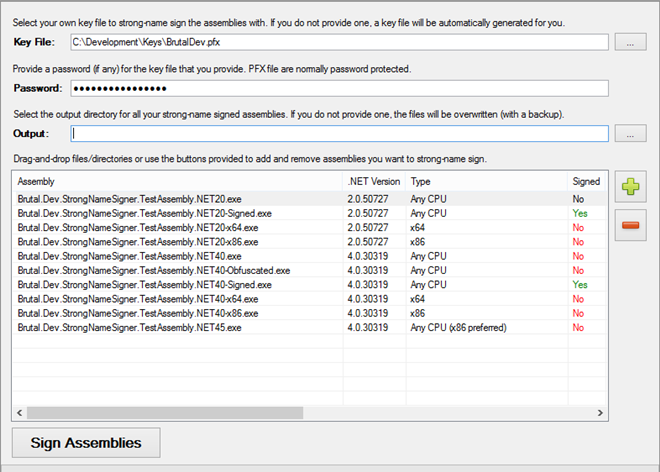 Simple command-line options to automate from script files. At minimum you can provide an assembly file, the rest will be done automatically.

A public API is exposed you can reference Brutal.Dev.StrongNameSigner.dll and make use of the static methods on SigningHelper to perform strong-name signing tasks from code or PowerShell scripts. 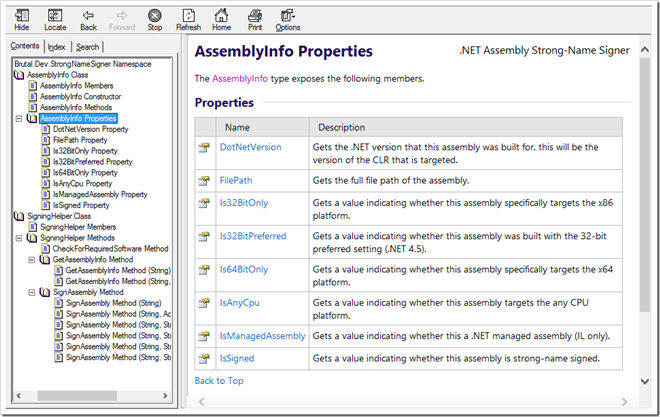 This tool was last released in 2010 and contains some bugs that don’t make it a very reliable option.

This tool appears to be the most promising but has been abandoned since early 2007. It does most things correctly but has a number of open bugs that Strong-Name Signer fixes. I had the option of contributing to this project but I wanted to change the architecture in a way that I could unit test the functionality easily.

The source code for this project is available on GitHub.